In what had become something of an annual tradition at AppCentrica, for our big summer social event we found ourselves returning to the mighty Ottawa River to take a new group of employees on a memorable adventure over rocks and rapids in nothing but a (big) rubber raft.

It has been two years since our last white water rafting trip, so the excitement (and nervousness from the rafting newbies) was palpable!  White water and waiver forms… how we have missed thee.

This year we fielded our largest group ever at 14 people, making us too big of a group to fit in a single boat.  For their safety and enjoyment, we placed the less experienced rafters in the safe confines of a big 12-person boat, while six of us braved the 6-person sport raft.  The morning weather was brisk, and the water was a “balmy” 7 degrees Celsius.  We wore wetsuits.  Full wetsuits. <shiver>

With less surface area and overall weight, these 6-person rafting trips/groups are often colloquially referred to as “flip trips” or the “swim team”, for the boat’s propensity to capsize.  Whether it was the high water, the skill of our river guide Bernie, or our (ahem…) awesome paddling skills, unfortunately, we could not live up to this reputation and successfully conquered whatever the river could throw our way.  Even as the first boat through the vaunted Buseater, which defeated its fair share of 12-person boats that day (but not ours!), we would only be swimming voluntarily on this day.  We spent much of the rest of the day rescuing stray oars, people, and the occasional lost shoe as boat after boat lost their battle with a rapid. 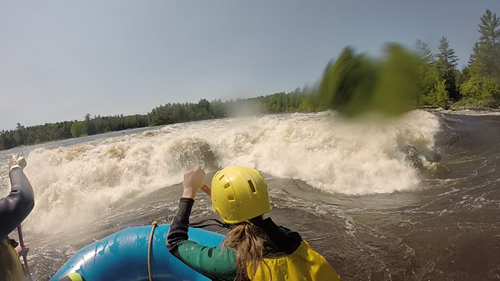 The remaining eight AppCentricans in the 12-man boat enjoyed a similar amount of success as the day warmed up and became pleasantly sunny.  Though quiet throughout much of the day, they were all smiles at (almost) every stroke.  Asad was our first involuntary swimmer of the day as he was literally thrown from the boat for violating boat etiquette; he grabbed the chicken line instead of paddling through a rapid.  Nothing like a brisk swim to get you over the fear of getting soaked.  Michael later joined this involuntary swimmers club as he was sucked out of the boat while attempting to surf Coliseum.  A shoe was thought lost in this tragedy, though it was dutifully rescued by the crack team in the 6-man.  Hoorah!

The rest of the weekend was an enjoyable, though chilly, time spent in each other’s company; hot tubs, cold drinks, potato chips, chipmunks (observed, not eaten), and plenty of laughs.  We welcomed three new members to the company daredevil squad as Riley, Arnold, and Chaveen all gallantly climbed then threw themselves from a 150’ construction crane bungee tower. 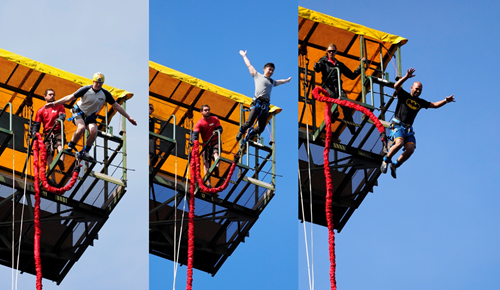 Thanks again to all who came out, and we look forward to doing something equally fun and crazy next summer!